Why Is This Super Humble Decorated War Hero Showing You His Most Advanced (Yet Easy To Learn) "Severe Survival" Secrets?

The Answer Is Simple! This Former Delta Operative Has Survived Dozens Of Meltdowns Around The World... And Knows From Deadly Experience That Typical "Bush Craft" Skills Will NOT Save You
When It Hits The Fan.

It's Time You Discovered Some Hardcore Military-Style Survival Skills PROVEN To Work In The Real World – Allowing You To Thrive With Total Confidence Throughout The Most
Nightmarish Situations Imaginable.

Best Part: As A Hotlist Member, You Can Even See It All For FREE If You Want!

Please allow me to rush you the most cutting edge short cut secrets that'll put you far ahead of everyone else during any kind of real crisis.

Instead of being clueless and frightened, you will suddenly have what it takes to control your own destiny with total confidence.

American Bad-Ass Survival is the leading-edge in modern "Severe Survival" instruction that spells out advanced, yet easy to learn "total preparedness" secrets.

It means suddenly gaining complete command of even the hairiest situations imaginable -- using nothing more than your wits and knowledge.

To See This All For FREE
If You Want.

These are nasty U.S. Special Forces techniques that can be learned in only a couple hours. And man do they work, no matter what your size and strength.

Even if you know nothing about fighting. Even if you have never been in a fight before in your life.

I'll tell you more about this in a second. For now, don't close this window or you'll lose your free American Combat Karate package.

Hi, it's Jimbo over here at FightFast.

For the past 25 years, we here at FightFast have been showing average guys simple tricks to protecting yourself and loved ones.

Which is why it really bothers me to know that most able-bodied American men will be left helpless as a toddlers during any kind of real crisis.

Can you imagine
when it really hits the fan?

Which is why some very smart people are advising civilians to have some secret skills and tools tucked away before it hits that fan. 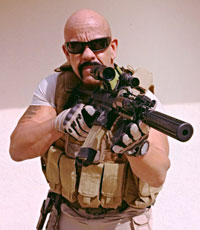 The good news is these secret skills and tools are NOT difficult to get your hands on.

That's what Dale Comstock brings to the table.

This man is the real deal.

With over 30 years of experience, Dale's a former Special Forces "A-Team" Green Beret. He served with the 82nd Airborne as a Long Range scout living for months in the field...

Under Conditions That Would
Kill A Billy Goat!

After that it was ten long bloody years in Delta Force as an Assault Team Leader.

Dale was twice decorated for Valor, and turned down the Silver Star because he was "just doing my job". Given the Bronze Staranyway, with the "V" for valor.

This hero kicks major league butt and his resume reads like a Hollywood action movie.

He's just recently concluded 9 years as a much feared and respected paramilitary contractor for our government, helping hunt down and eliminate bad guys all over the world.

Let's just say when it comes to terrorist thugs...

Dale Is Very Effective
At Taking Out The Trash.

His 3 decades of surviving in the field and facing down bloody combat have honed Dale's survival skills to a razor's edge.

He knows better than anyone else the ugly truth about what really happens when a country is thrown into chaos, the power is shut down and regular folks like you and me start to run out of food and water.

Good news is that some people band together to help each other. But the bad news is that most others panic. The animal instinct takes over and they resort to looting, brutality and even murder to survive.

Look... our own government estimates that a shocking 90% of urban Americans will die within six months of a massive power grid failure.

You can imagine how desperate and dangerous things will get.

Which explains why Dale is utterly disgusted with so-called survival experts who teach nothing but bush craft skills -- as if a post-crisis America will be something like an extended camping trip.

This Kind Of "Pie In The Sky"
Thinking Will Only get you killed.

Dale insists that knowing how to start a fire with sticks or what tree bark is good to eat will NOT be enough.

So when we decided it was time to create a true "survival" video for civilians, we turned to Dale because HE is one of the most respected and sought-after experts in the field.

We convinced him to let us film him, revealing the amazing secrets and material and ultimate survival knowledge that he acquired over 30 years in the most screwed up places on the planet.

Kuwait City... Mogadishu... Bagdad... Panama City... the jungles of Central American... the deserts of Iraq and Afghanistan... and dozens and dozens of other hornet nests around the world.

This is where Dale sharpened his survival skills to a razor's edge.

Honestly, when it comes to living off your wits in a hostile environment, Dale is the guy I'd trust more than anyone. He's the by far the most qualified person to teach you how to stay alive if something goes terribly wrong.

His FightFast Gold Level DVD Survival package spells it all out for you. This isn't Dale teaching you how to catch fish or anything like that.

No. This package is over SIX HOURS of intense and super practical "how-to" survival skills that can absolutely save your life if, heaven forbid, modern society ever does melt down -- for whatever reason

Because, after witnessing many meltdowns around the globe, Dale knows better than anyone that your survival will depend on more than just knowing which berries are safe to eat.

Keep your Bug-Out Bag in your trunk in case a catastrophe forces you to hit the hills with NO time to get back to home base.

The Ruck Sack on the other hand remains at your home. Its purpose is to allow you and family members to live in the field indefinitely at a moment's notice.

Look... as a long range scout and Delta operative, Dale had to actually live long term out of bags just like these. Did it for over 30 years, so he knows what he's talking about.

Most times he survived comfortably from his Ruck Sack, or what he calls his "camper". But Delta was the brain child of the Bug-Out bag after the British SAS were ambushed during Desert Storm in 1991.

Dale was right there during the debriefing of the only Bravo Two Zero patrol member who wasn't dead or captured by the enemy.

Point being, some highly trained guys had to lose their lives to prove that your odds of survival go way up when you have both a Ruck Sack and a Bug Out Bag.

Of course most people don't have anything like this ready. Or they load up these sacks with the WRONG equipment and survival gear.

These mistakes can cost
you your life.

Which is why Dale dives deep and shows you exactly how to prepare your adaptable "Bug-Out Bag" and your Ruck Sack -- and which items need to be continually "rotated" in and out to ensure they're always in tip top shape and ready-to-roll.

Here's some more of what you'll discover:

And a lot, lot more.

And much, much more.

The skills Dale will teach you are an intense combination of both ancient wisdom and modern variations.

You can learn everything just by watching the DVDs. No practice or training necessary — these are "see it, and do it" skills he's honed over a lifetime – and he's trained hundreds of civilians this same material literally in hours!

Like I said, for anyone smart enough to check this out today, you'll also receive a very useful bonus – Dale Comstock's American Combat Karate.

It's an amazing DVD program that'll show you – step-by-brutal-step – exactly how to take care of business with total confidence in just about any confrontation.

I gotta say, much of this material isn't pretty, which is bad news for your opponent.

Because when it comes to armed combat, or hand to hand, or just some simple bam-bam he's out kind of tricks, Dale Comstock is the guy you'll want to train with.

And you learn it all so FAST. Perfect for anyone who isn't big... doesn't have much time – since all you need, really, is an hour or so to "get" it -- and needs to be 100% positive these moves will work in the real world.

It's like this secret "short cut" to becoming a truly dangerous fighter. Using only a few proven moves that have been tested, over and over, in real life-threatening combat.

Okay... this entire Gold Level American BadAss package is over six hours of some of the most practical and eye-opening training you will ever encounter.

Normally I'd sell this for $198. And the American Combat Karate bonus would cost you $76 if you tried to order right now from my website. So that's a combined total of $274.

Nope – because you've made it to this special hidden webpage, I've just loaded up your new hotlist account with $177 – allowing you to now get this entire package for just $97 – with NO additional shipping or handling charge.

That is an extraordinary bargain. To get in on this, hit the "Yes, I Want My Gold Level Survival Package" button.

But it gets better.

Because you don't even risk a penny of that $97

Because if you don't agree that this Gold Level Survival Guide is the most astonishing thing you've ever received, if you don't want to keep it for any reason, even NO reason...

...then I insist you send it back for prompt refund of your $97, and KEEP the American Combat Karate DVD self-defense package as my gift to you for taking the time to check this out.

That's more than generous. It means you can see it all for free if you want, with a $76 bonus to keep as a free gift just for giving this a chance

American Combat Karate is some of the best training FightFast has ever produced. Devastating moves -- that can learned in just a short afternoon – to make you invulnerable against a larger opponent.

This is perfect material for us guys who may be a little passed our prime and looking for a leg-up against younger, stronger, more aggressive opponents.

And it's yours to keep for free...

even if you return everything else for a full and prompt refund.

So you get a chance to see everything for free if you want, plus a priceless free bonus. It just can't get any better than that.

But you must do this now. Hit the "Yes" button while you can.

If you close this page there's no way for you to get back here. Which means you will permanently lose the $177 now in your hotlist account along with your free bonus material.

Don't let that happen, especially since you are risking nothing and yet stand to gain so much.

For anyone truly interested in being prepared, and protecting their loved ones, this is truly an astonishing deal.

You'll be glad you did.